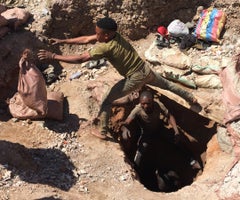 By Scott Patterson and Alexandra Wexler

Apple Inc., AAPL 2.42% Volkswagen AG VOW3 1.38% and about 20 other global manufacturers found themselves on the defense when Amnesty International reported two years ago that the cobalt in some of their batteries was dug up by Congolese miners and children under inhumane conditions. Many of the companies said they would audit their suppliers and send teams to Congo to fix the problem.

Their efforts haven’t kept hand-dug cobalt out of the industry supply chain.
At a cobalt mine named Mutoshi in Kolwezi, freelance Congolese workers known as creuseurs-French for miners-could be seen in May descending underground without helmets, shoes or safety equipment. The mine’s owner is part of the global cobalt supply chain for companies including Apple and VW.
Miners there were using picks, shovels and bare hands to unearth rocks rich with the metal. Water sometimes rushes into holes and drowns miners, and an earth mover buried one alive last year, said local creuseurs and mine officials.

“Of course, people die,” said Christian Schöppe, then acting chief executive of the Mutoshi mine’s owner, Chemaf SARL, in May. “This is really shitty work.” He called the miners “barbarians” and said Chemaf had resisted giving them safety equipment because they would sell it.

Global demand is soaring for cobalt, which is used to conduct heat in lithium-ion batteries in products from smartphones to electric vehicles. Cobalt prices have more than doubled since 2016, putting Congo in the spotlight. The country produced 67% of the world’s cobalt in 2017, according to Darton Commodities Ltd., a U.K.-based cobalt-trading firm.

Concerns about human-rights abuses in cobalt mining mounted after the 2016 report documenting inhumane conditions among creuseurs, also called “artisanal” miners. Companies have faced backlash from consumers disturbed by the use of workers toiling in dangerous conditions in one of the world’s most impoverished countries.

It isn’t easy for global manufacturers to trace cobalt’s source in Congo, because it passes through multiple companies and countries. Some mining operations mix industrially produced and creuseur-dug cobalt, say mining executives who have worked in the country.

“When we speak to companies along the battery value chain, this is one of the biggest issues they have,” said Milan Thakore, an analyst at U.K. commodities researcher Wood Mackenzie. “How do we trace where the cobalt has actually come from?”

The Wall Street Journal found that cobalt from Mutoshi, one of Congo’s biggest creuseur-worked mines, is still making it into the global supply chain, although where it ultimately ends up is hard to know.

One company in the chain, Samsung SDI, says it is aware some of the cobalt it gets from Chemaf is produced by the Mutoshi mine’s creuseurs. If companies stopped buying it, said Samsung SDI’s director of corporate strategic development, Bernardino Ricci, it would put people out of work. “We’re pro artisanal mining because we don’t want the communities to be affected.”
‘Problem for Apple’

Chemaf’s Mr. Schöppe said he wasn’t concerned about where his company’s creuseur-mined cobalt wound up.

“I don’t care about supply-chain problems,” he said in May at a Chemaf facility in Congo. “That’s a problem for Apple and Samsung.” He stepped down as CEO last month and says he remains on Chemaf’s board. His successor hasn’t begun, and Mr. Schöppe says Chemaf executives can no longer speak with journalists.

Umicore disputes any implication that it buys cobalt produced by creuseurs at Mutoshi-or anywhere else-referring to its longstanding policy against the practice. Umicore Senior Vice President Guy Ethier said the cobalt Umicore buys from Chemaf is produced only industrially, not by creuseurs. He said he visited Mutoshi in August and said Umicore has methods to detect whether creuseur-mined metal is mixed into its supply.

Umicore receives about three-fourths of the cobalt Chemaf produces and Samsung SDI gets the rest, through Trafigura, Chemaf’s Mr. Schöppe said. He said he doesn’t know if any cobalt Umicore buys is from Mutoshi. Mr. Virji didn’t respond to a question about whether his company sells creuseur-mined cobalt to Umicore.

Trafigura, which said cobalt it buys from Chemaf includes metal from Mutoshi, declined to say if it sells cobalt to Umicore or Samsung. Apple representatives declined to comment on Umicore’s supply chain and didn’t respond to questions about Samsung SDI’s use of cobalt from Mutoshi. An Apple spokeswoman said the company’s supplier code of conduct “underscores a commitment to human rights, environmental protections and sound business practices.”

A VW spokeswoman said the company is confident “the established due diligence framework of Umicore makes sure that no ASM”-artisanally-mined material-“is entering our specific supply chain.” VW didn’t respond to questions about Samsung SDI’s use of cobalt from Mutoshi.

Apple and others have also used batteries whose supply chains trace to another big buyer of creuseur-mined cobalt in Congo, China’s Zhejiang Huayou Cobalt Co., the 2016 Amnesty report said. Apple no longer uses cobalt produced by Huayou, said a person familiar with the iPhone maker.

Huayou spokesman Bryce Lee said the company has implemented a system to better manage its supply chain and has worked with a nongovernmental organization to help comply with global standards for human rights in mines.
Creuseurs in Africa

Creuseurs are ubiquitous across Africa, especially in diamond and gold mining, where they work independently of mining companies, sometimes on companies’ land with those companies’ approval, typically without safety equipment.

In Congo, creuseurs often dig for cobalt outside designated mining areas with no supervision and frequently bring children to work alongside them, say some mining executives and nongovernmental organizations. Congolese creuseurs often sell their findings at markets to traders or directly to the mines’ owners. They produce about 20% of Congo’s cobalt, according to S&P Global Market Intelligence.

The Congolese government says it is seeking to protect the miners, for whom the informal labor is the only option. “I cannot lie and say that it’s easy,” said Richard Muyej Mangeze Mans, governor of Lualaba province, where the Mutoshi mine lies, “but we are making progress.”

Chemaf sends mixed messages about creuseurs. Its website states its cobalt operations are “fully mechanised,” an industry euphemism for industrial mines without creuseurs, although it also mentions a “pilot” artisanal-mining project in Mutoshi. Thousands of creuseurs could be seen living and working at Mutoshi in May. Chemaf’s Mr. Schöppe said he wasn’t aware of the website’s “fully mechanised” claim.

“We work in bad conditions,” said Fiston, a 32-year-old creuseur at Mutoshi.

Leslie Melrose, Chemaf’s general manager of mining, said in May that it is addressing Mutoshi working conditions and plans eventually to replace creuseurs with an industrial operation. Mr. Virji, Chemaf’s chairman, said: “We are going to make it right” for Mutoshi workers.

Trafigura says thousands of creuseurs at Mutoshi have been provided safety equipment, and a recent video of the site reviewed by the Journal shows dozens of workers wearing helmets and gloves.

Chemaf said that Mutoshi has 300,000 tons of cobalt in the ground, enough to keep producing 30 to 40 years, and that the mine has the capacity to produce 16,000 tons of cobalt annually. That would make Chemaf one of the world’s largest cobalt producers.
Supply-chain reviews

Companies have moved to scrutinize their cobalt sources, including Umicore, which in 2016 hired accounting firm PricewaterhouseCoopers to review its cobalt supply chain, including whether it used creuseur-mined metal. Umicore’s Mr. Ethier said the company is “very concerned about human rights, child abuse, health and safety.”The Apple spokeswoman, Sam Fulton, said the company started mapping its supply chain for rechargeable batteries in 2014 and that 100% of its smelters participated in independent third-party audits into cobalt-supply sources. Apple declined to say if its audits included Chemaf.

The company’s supplier responsibility standards don’t exclude the use of creuseur-mined commodities.

“There are real challenges with artisanal mining of cobalt in the Democratic Republic of Congo,” an Apple spokesman said, “but we believe deeply that walking away would do nothing to improve conditions for people or the environment.”

Apple and others have joined groups such as Better Cobalt, Responsible Cobalt Initiative and Global Battery Alliance that are developing methods to help trace cobalt’s origin and eliminate abuses.

Pact, the Washington, D.C., NGO that China’s Huayou says it hired, develops methods to help mining companies using creuseurs become compliant with Organization for Economic Cooperation and Development regulations.
Ferdinand Maubrey, a project director at RCS Global, a U.K. supply-chain-audit company overseeing the Better Cobalt project, says: “It’s not about a perfect mine site, it’s about showing what’s going on at the mine site and showing continual improvement.”

PwC didn’t visit Congo for its audit, according to Umicore. PwC Partner Marc Daelman said: “Our assurance relates to validating compliance by Umicore with their publicly disclosed framework.”

VW works with battery-cell providers to analyze mines and determine if there is “child labor or unacceptable working conditions,” said its spokeswoman, Leslie Bothge. VW is aware Chemaf gets cobalt from industrial and artisanal sources, she said. VW interviews nongovernment organizations and industry experts in Congo, she said, and sends teams there to verify its standards are met.

Other companies are exploring cobalt deposits in the U.S., Canada and elsewhere. Guaranteed creuseur-free cobalt is available from some big industrial-mining companies operating in Congo, but much industrial production is locked up for years in long-term contracts.

In a 2017 follow-up report, Amnesty applauded Apple’s moves to weed out child labor from its supply chain, saying it is “the industry leader when it comes to responsible cobalt sourcing.” It said VW hadn’t addressed whether certain companies in its supply chain received cobalt from Congo.

The follow-up said: “Some of the richest and most powerful companies are still making excuses for not investigating their supply chains.”
Chemaf and Umicore’s relationship traces back decades. Mr. Virji, Chemaf’s chairman, said the pharmaceutical company he started in Congo got a payment in the 1990s in an unusual form: cobalt. He found a trader to sell it to Union Minière SA, a Belgian mining company that in 2001 changed its name to Umicore.

In 2002, Congo rolled out a mining code seen as friendly to international mining companies, and Mr. Virji said he bought licenses to mine sites including Etoile, where creuseurs dug for metal. Mr. Virji eventually ejected the creuseurs and built a mechanized operation there.

Umicore began focusing on chemicals production in the early 2000s and became one of the world’s biggest cobalt consumers, including of Chemaf’s production.

Mr. Virji said he bought creuseur-produced ore from licensed traders to supplement metal his mechanized facility produced. In 2014, he said, he bought Mutoshi from Congo’s state mining company for $52 million. Mutoshi, as now, was 100% creuseur-mined, he said. He considered evicting the creuseurs but decided instead to buy their production as “a way to control them.”

Until this year, children worked at Mutoshi alongside adults, said Chemaf’s Mr. Melrose and creuseurs there, hauling bags of cobalt and helping women clean rocks at watering holes. Children have been largely removed from the site, Mr. Melrose said.

Trafigura said it hired Pact to help Chemaf improve working conditions. “Controls around the human-rights impact are being introduced as we speak, and it’s not without its problems,” said James Nicholson, head of corporate responsibility at Trafigura.

Chemaf’s Mr. Schöppe said that, because the work is dangerous, the Pact effort “doesn’t change anything.”

Mr. Virji, Chemaf’s chairman, at his house in Congo in May, said he was enjoying newfound success a year after nearly facing bankruptcy, having bought a Rolls-Royce for his second home in Dubai. He said he had plans to buy a private plane for Chemaf’s use. 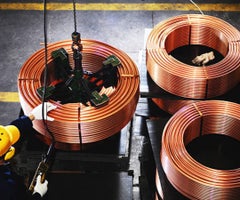 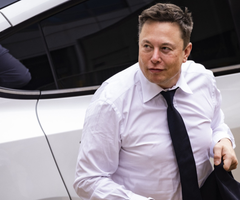 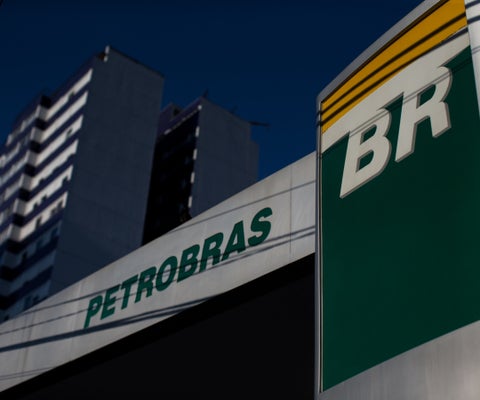 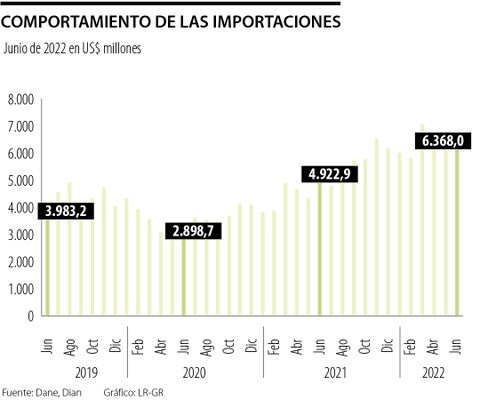 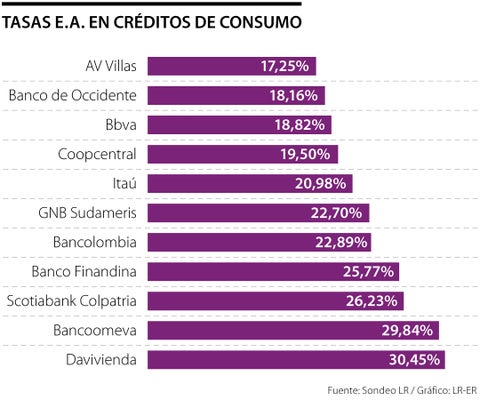 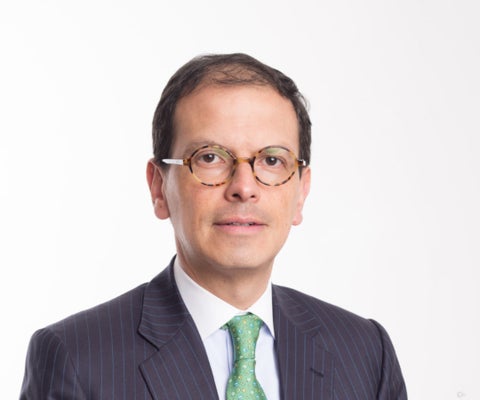 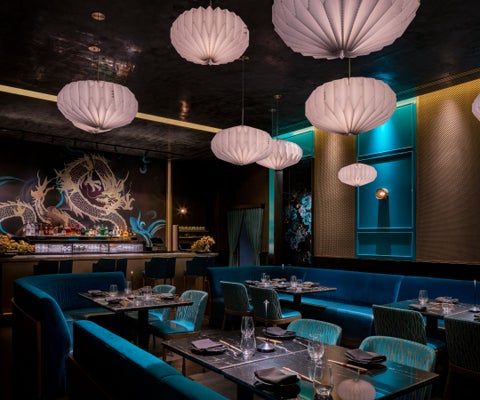