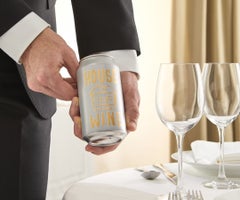 A Skeptic’s Guide to Wine in Cans

WHEN WAS the last time you purchased a wine for a particular sport or outdoor activity-a Pinot Grigio for a beach volleyball game, a rosé for a round of golf or maybe a bubbly to bring along to the ballpark? Until recently, my answer was never. But canned-wine makers are betting that’s what more drinkers want to do, and they seem to be right. 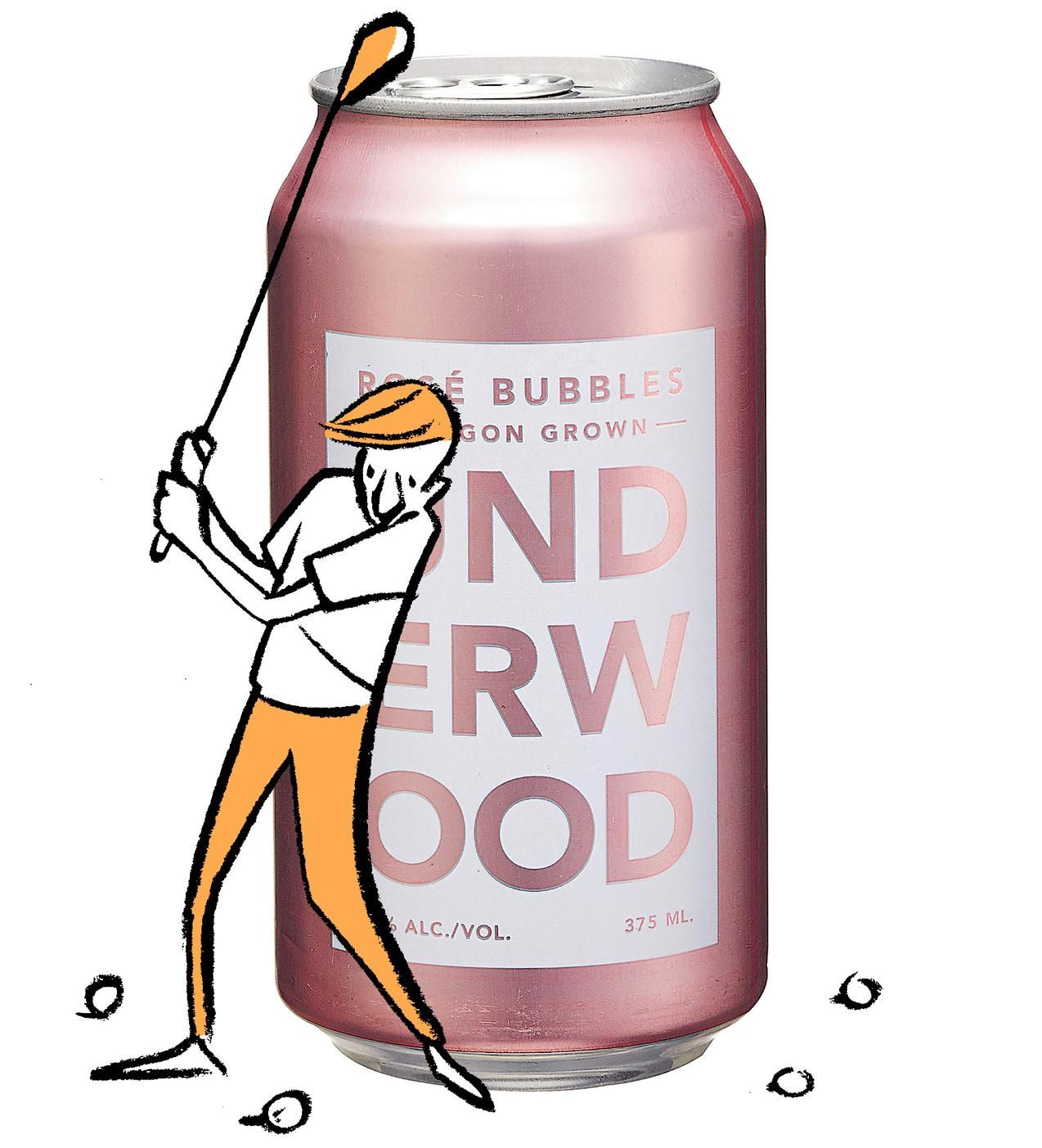 According to Nielsen, sales of canned wine rose by nearly 80% this year over last. Still, wine in bottles saw over $15 billion in sales this year and wine in boxes $1.4 billion, while sales of wine in cans amounted to about $90 million. So, is canned wine really the Next Big Thing or-dare I say it-a flash in the can? 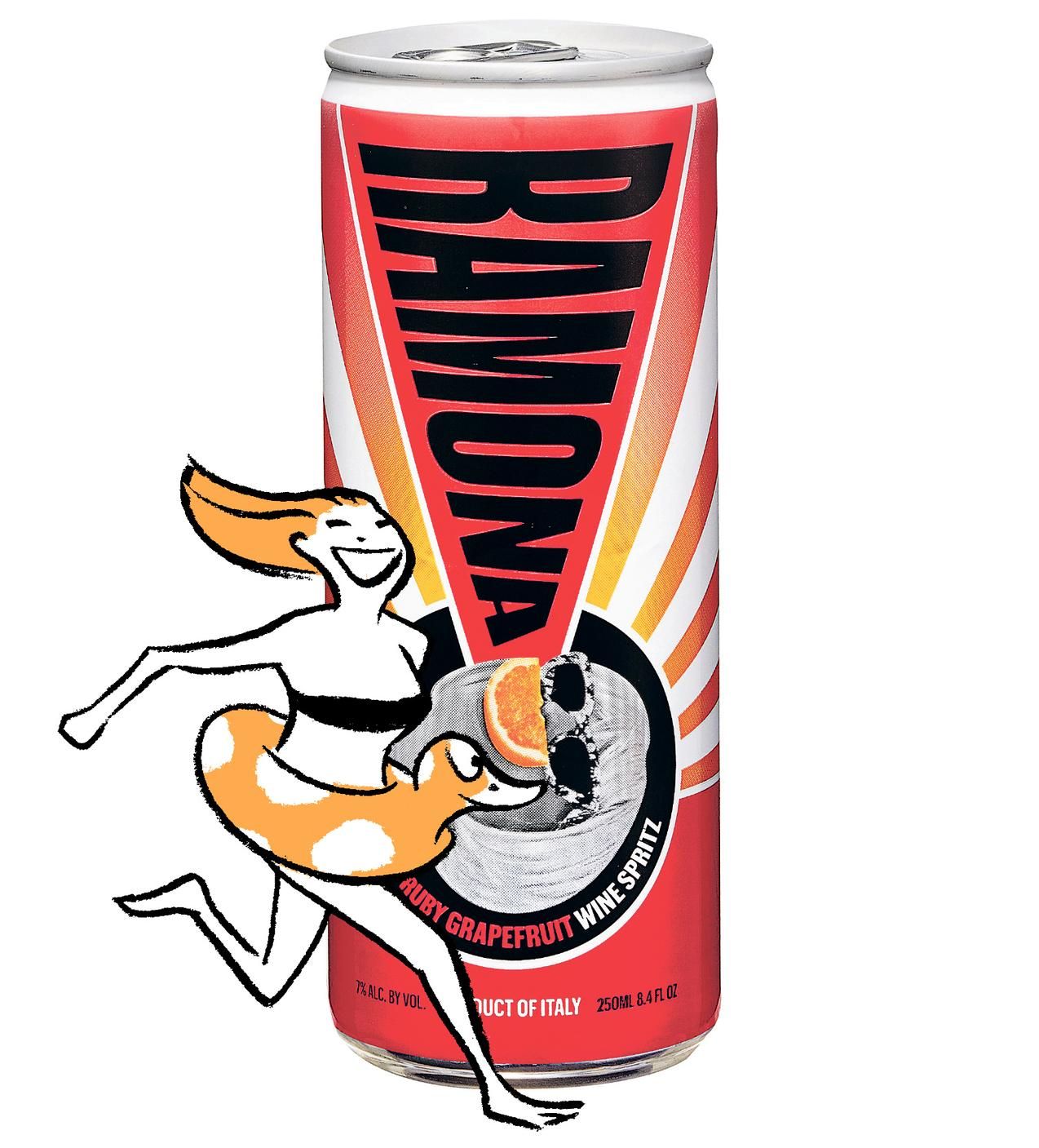 “Boxes represent a much bigger category than cans but [are seeing] slower growth,” said Jonathan Bennett, executive vice president, merchandising and supply chain, for Total Wine & More, a national chain with 200 stores in 23 states. Mr. Bennett said the company is keeping an eye on canned wines and stocking more and more options. This spring, they launched a canned version of one of their most popular winery-direct wines, Buttercream Chardonnay. 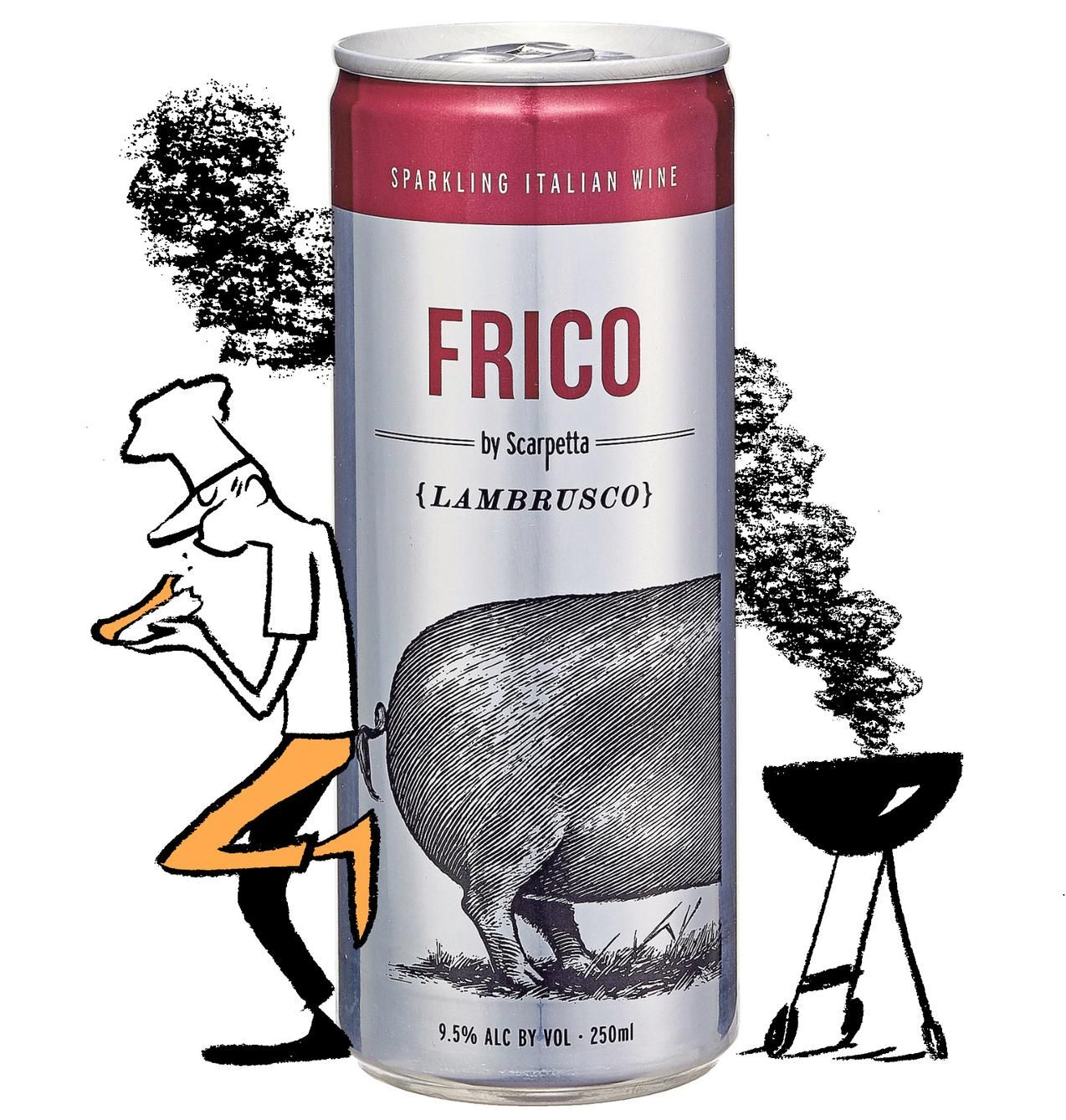 Ryan Harms, founder and owner of Union Wine Company, an Oregon-based winery that produces wine in both bottles and cans, thinks canned-wine sales are actually greater than the Nielsen numbers show. “Nielsen only tracks retail, not restaurant sales,” he pointed out. His company was one of the first canned-wine producers in the U.S., debuting in 2014, and is currently one of the largest, producing over a half-million cases of bottles and cans. Mr. Harms estimates that his company accounts for about 15% of canned-wine retail sales in this country. 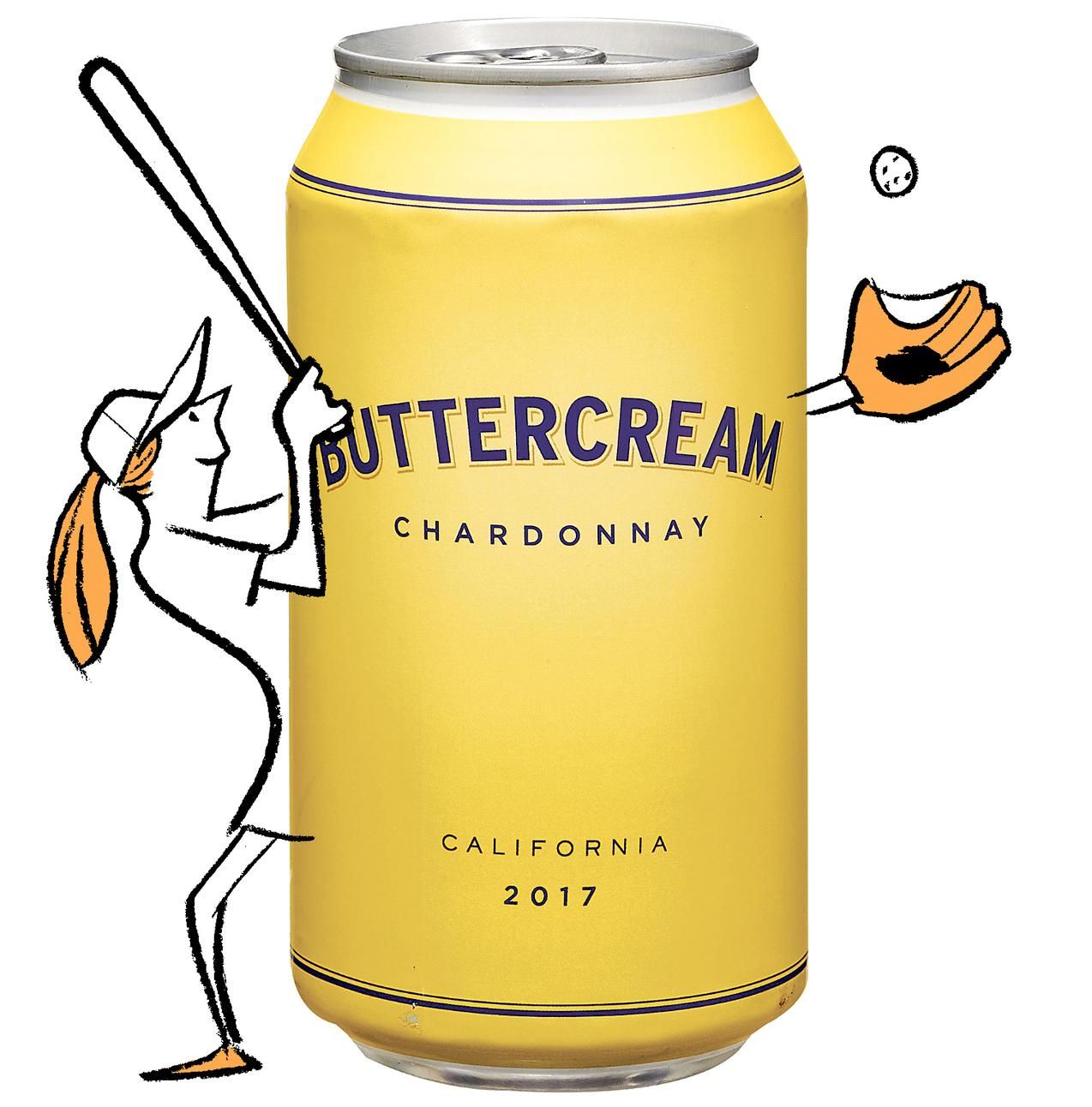 In my weekly “On Wine” column, I’ve monitored the trend and maintained a degree of skepticism regarding the relative merits of this mode of packaging. But there’s no denying the dynamic proliferation of canned wines; a significant number have debuted in just the past couple years. Some are extensions of existing brands, such as Buttercream or House Wine, a label created by Charles Smith, now owned by Precept Wine. Others, such as Larkan Pink from Bruce Devlin and Sean Larkin at Three Clicks Wines, are new products from winemakers wanting to try a new format. 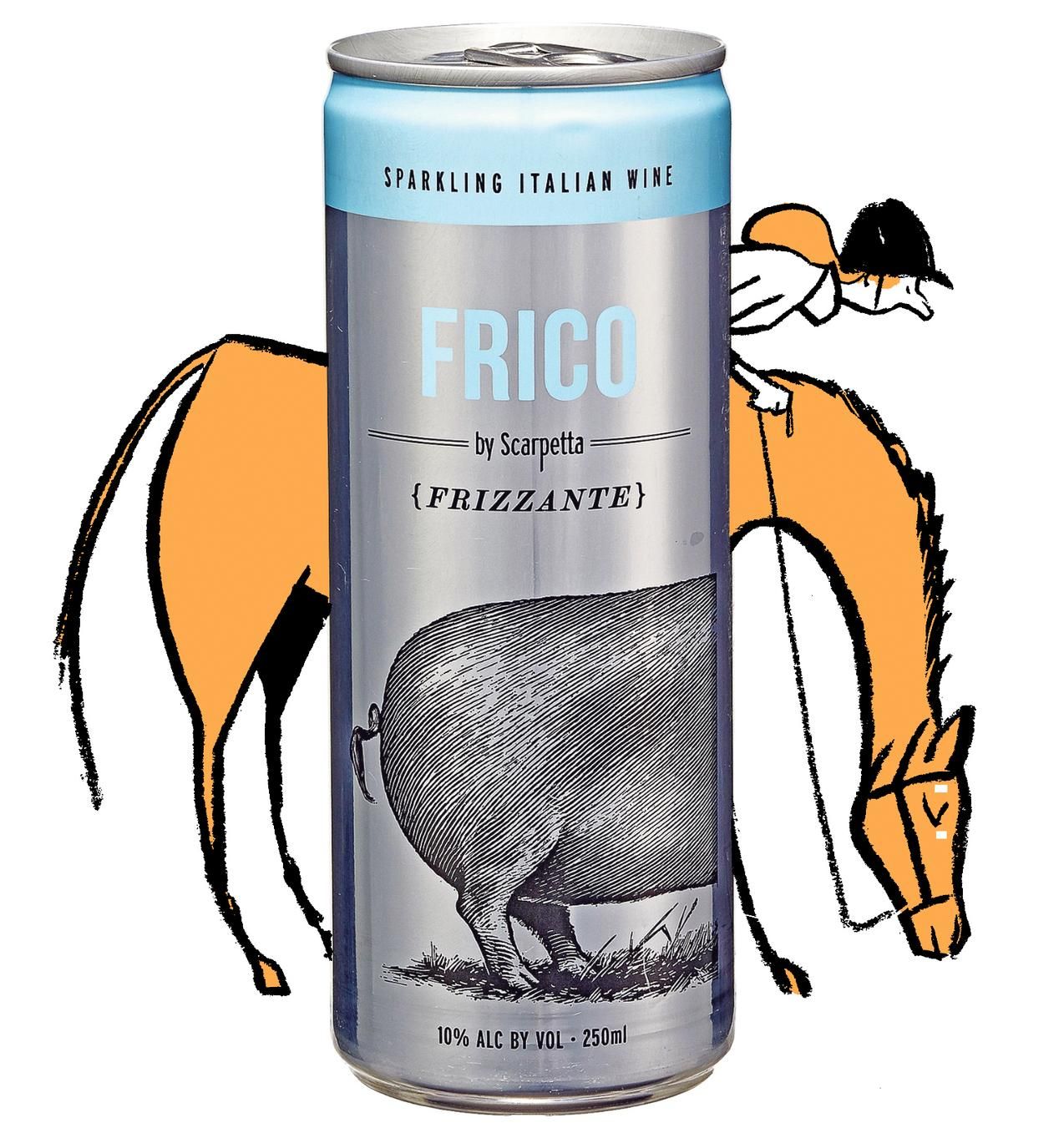 Options that weren’t available 20 years ago make canning accessible to winemakers traditionally bound to bottles. The Larkan Pink, made from Pinot Noir sourced in Carneros, Calif., is canned via a mobile canning unit driven from winery to winery. Some winemakers turn to John Wilkinson, managing partner at Bin to Bottle, a custom crush winery in Napa, Calif. Mr. Wilkinson installed a canning line at his facility only this past spring, and he said he currently fields about four calls a day from winemakers hoping to make a canned wine at Bin to Bottle. While the majority of his business is still focused on high-end wine in bottles, the canned side is growing fast. 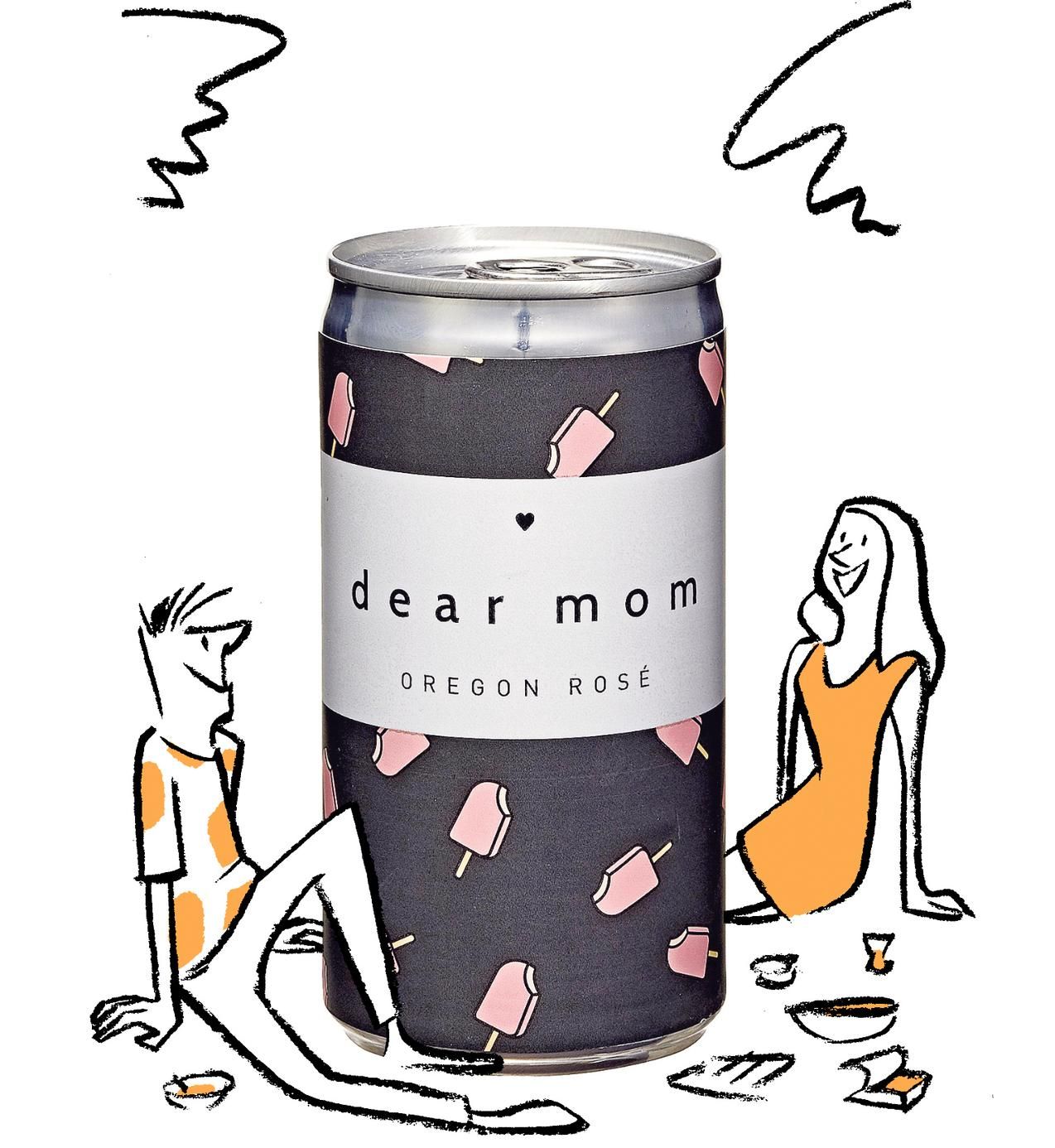 The technical challenges involved in producing wine in cans can be daunting, even for experienced producers. For example, each wine can comes with a liner whose exact composition is a closely guarded secret, and every new wine must be tested by the can company before the cans can be released to be filled by the individual producer, in order to ensure that the wine is compatible with the can lining. Mr. Wilkinson, like all the canned-wine producers I spoke with, works with Ball Corp oration, the largest beverage-can producer in the world. A canned wine also requires a bit of liquid nitrogen before the can is closed. “This is what keeps the wine fresh and the can hard,” explained Mr. Wilkinson. 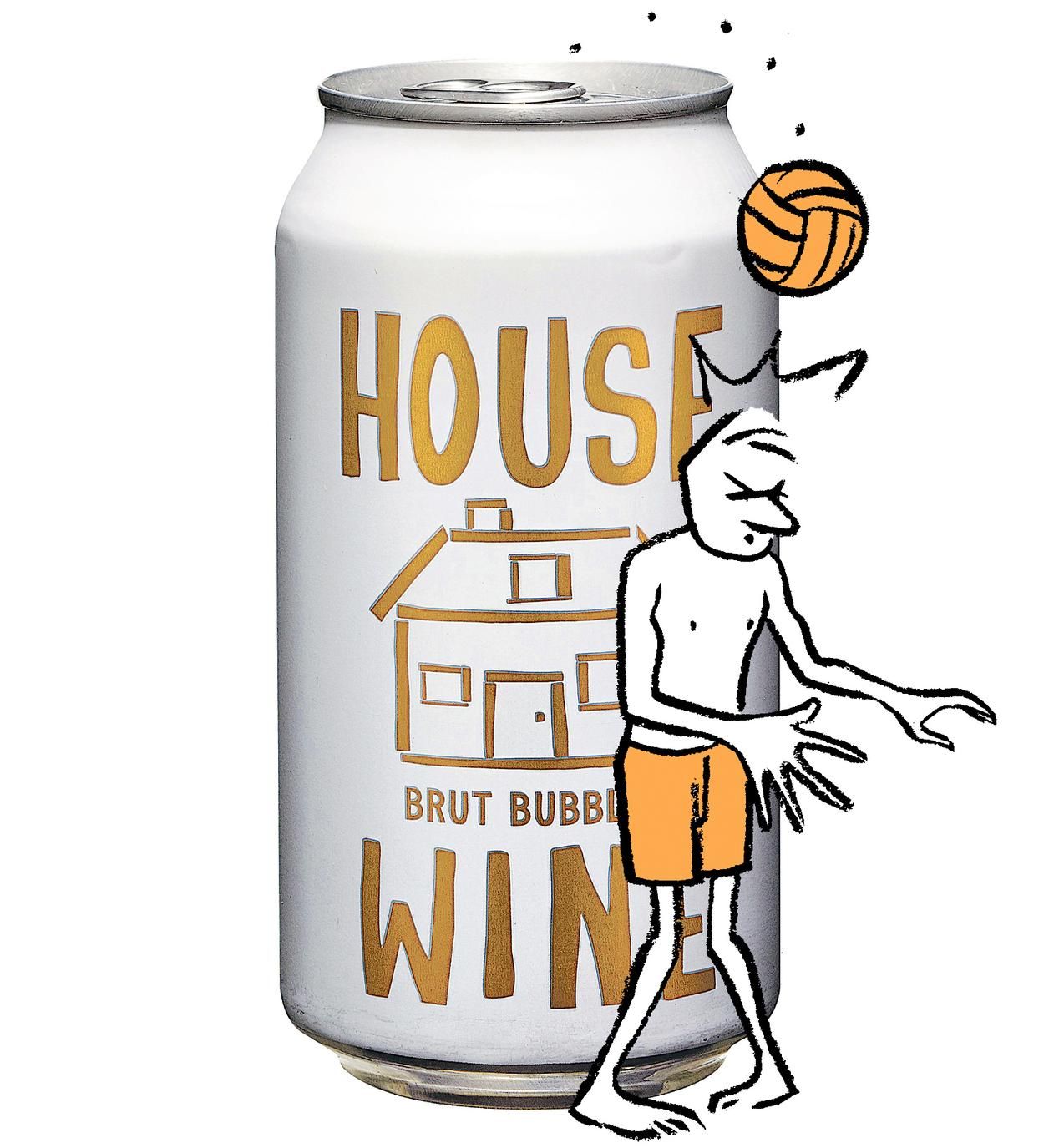 A Colorado-based Ball Corporation spokesperson confirmed both the proprietary nature of the can lining and the fact that winemakers must send 64 ounces of any wine destined for cans to test it for structural compatibility-i.e., how the wine affects the structure of the can and how likely the liner is to stand up to corrosion. (The company tests all beverages slated to go into their cans, including soft drinks.)

Consumers have their own adjustments to make when considering canned wines. Even though canned-wine makers happily tout all the leisure activities their wines are suited to, and 375-ml wine cans are just slightly larger than the standard can of beer you might knock back on a hot day, these wines aren’t made for guzzling. A can of beer might be 5% alcohol, while a can of wine might be twice that number or more. Some producers have therefore opted for cans of a smaller size-187 ml or 250 ml. 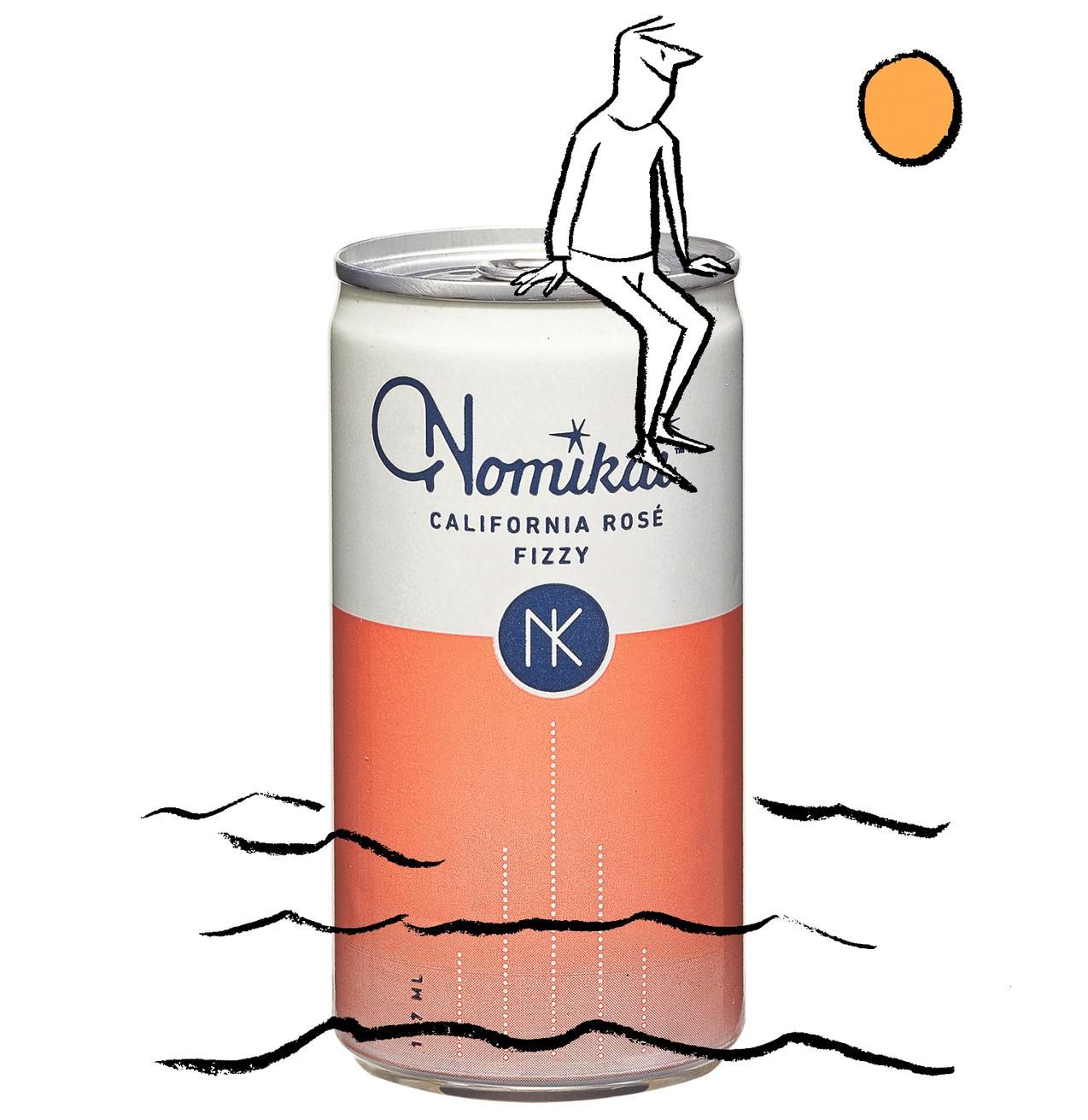 Whatever the size, consuming straight from the can thwarts one of the great pleasures of wine: its aroma. Unlike the wide mouth of a wine glass, a can’s small opening isn’t made for sniffing; any scent of flowers, fruits or forest floor will be trapped in the can. Some producers compensate by adding sugar. As Hal Landvoigt, director of winemaking for Precept Wine explained, “A little residual sugar boosts that aromatic experience and tricks your brain into thinking you have aromatics.” 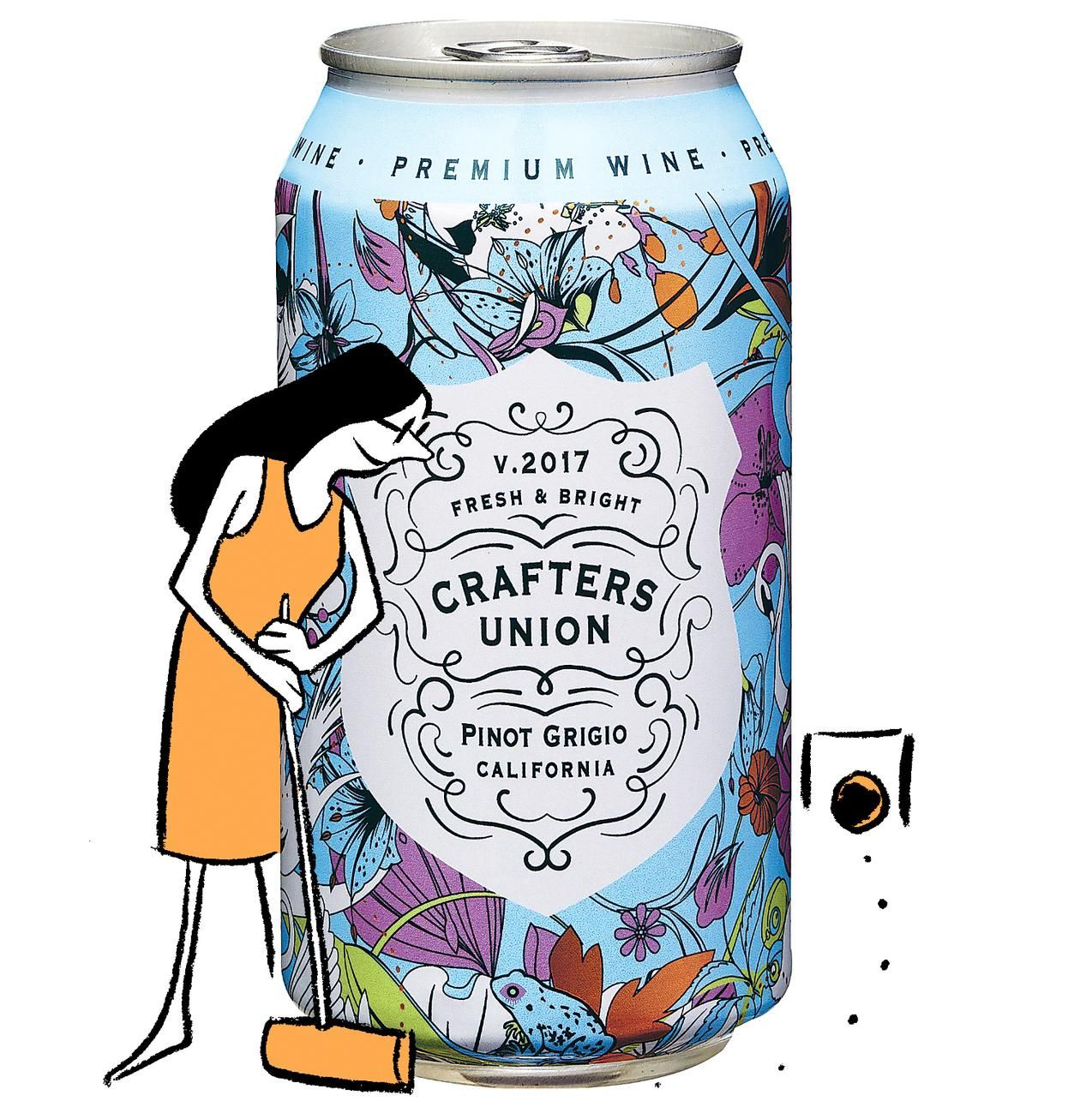 While wine drinkers are regularly counseled never to drink white wines too cold or red wines too warm, temperature-related advice seems immaterial to canned-wine fans. Drinkers of cans like them cold-really cold-whether rosé, white or red. Temperature was the chief reason Jordan Salcito, the New York-based creator of the Ramona Organic Wine Spritzes, chose the slim 250 ml size for her white-wine-and-citrus-juice drinks, sort of like sophisticated wine coolers. “I didn’t want the can to get warm in your hand while you’re drinking it,” she said. The smaller the can, the shorter the sipping time. 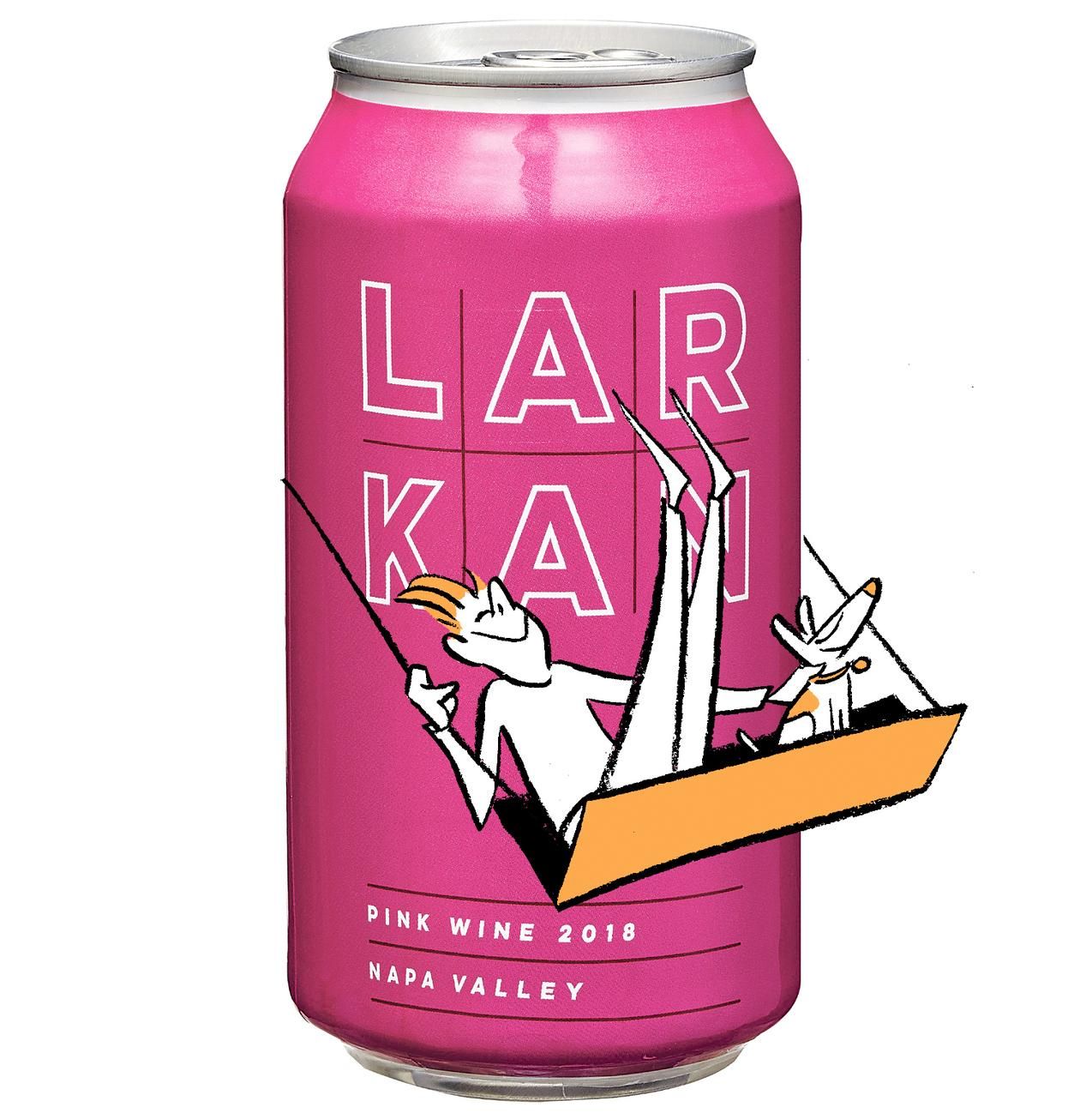 Ms. Salcito’s Ramona Ruby Grapefruit Wine Spritz was one of my favorites among the 30 or so cans I purchased for tasting over a week spent drinking wine exclusively from cans. (See “Can Do,” above, for the list of recommended wine-and-summer-activity pairings that resulted.) It was also one of the very few wines I enjoyed straight from a can, as opposed to poured in a glass, thanks in part to the grapefruit. It was also one of less than a dozen I truly liked and would drink again-but more on that later.

First, the high points. Many of the best canned wines were fizzy. People expect carbonation when they’re drinking from a can, a number of producers told me. (These wines are labeled bubbly or frizzante, not sparkling, because they don’t necessarily meet the legal definition of that word.) There is a lot of rosé in cans, too, bubbly and otherwise. In fact, when I asked a wine shop associate to show me canned wines, he replied, “Do you mean rosé?”

The canned rosés varied wildly in color, composition and age. Word to the wise: Canned wines without vintages don’t necessarily offer any indication of how long they’ve been on the shelf. (Some cans I found had dates on the bottom; others had codes that I could decipher, while still others had codes that I could not.) And a vintage isn’t always a reliable guide. The 2017 Sterling Vineyards rosé, which I consumed in a ballpark, not only tasted old but also high in alcohol, while the 2017 Dear Mom Oregon Rosé was actually pretty good-maybe because it was a really beefy rosé, more like a red.

Overall and unsurprisingly, the fresher wines were invariably better. These included the 2018 Larkan Pink Wine Napa Valley and the Underwood Rosé Bubbles, fruity and fresh. The Lambrusco and Frizzante wines from Frico were fresh and delightful, both canned in 2019. Another fizzy favorite, the House Wine Brut Bubbles, was almost as good as the Fricos if a bit more neutral in flavor.

I tasted every wine both straight from the can and from a glass (save for that ballpark rosé), and while some held up better from the can than others, all were better from a glass. Drinking straight from the can not only meant forsaking aromas but also savoring a first taste of can, not wine. When the wine was lousy the can only amplified its worst attributes in the manner of a tinny loudspeaker. And there are some really, really bad wines in cans. Some of the worst I tasted came in cute packaging, including the Oceans Away Sparkling Pineapple Wine that tasted like pineapple juice left over from the year before; the Babe Rosé (all marketing, no wine); and the truly execrable Crazy Legs wines, a Sauvignon Blanc and a Red Blend, both infused with hops.

Prices didn’t correlate with can size any more than they did with quality. I paid $7 for a 375 ml can and as little as $3 for the same size. The Sofia Blanc de Blancs Mini was one of the worst wines in my tasting-flat and tinny-but it cost $4 for a tiny 187 ml can.

In a novel format, a bad wine can have an outsize impact. “I am concerned that if consumers have a poor first experience with canned wine they will blame the can as opposed to the wine put into the can,” said Mr. Harms. Might quality issues ultimately relegate canned wine to a footnote in wine history, sending wine drinkers back to the bottle or the box? Only time will tell. In the meantime, I have a few favorites I’d happily pop open at a tennis match, the beach or even on my own front porch.

Cans certainly can be convenient to tote along, whatever the event-but why bother if the wine inside isn’t good? Here, 10 canned wines as quaffable as they are portable, paired with the summer activities they suit best 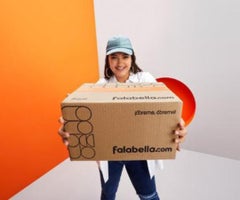 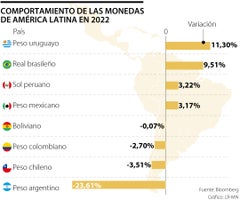 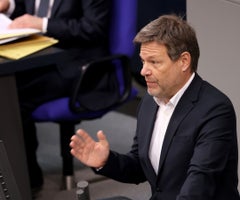 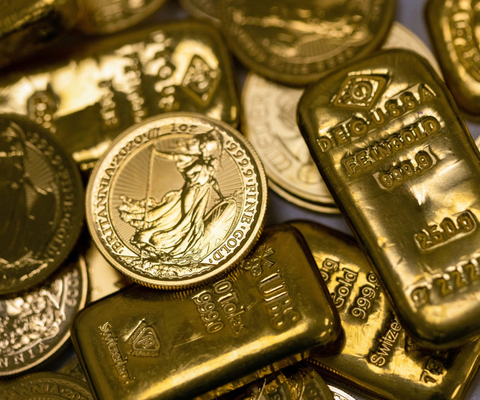 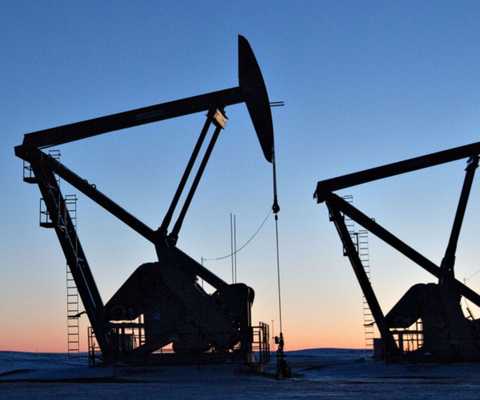 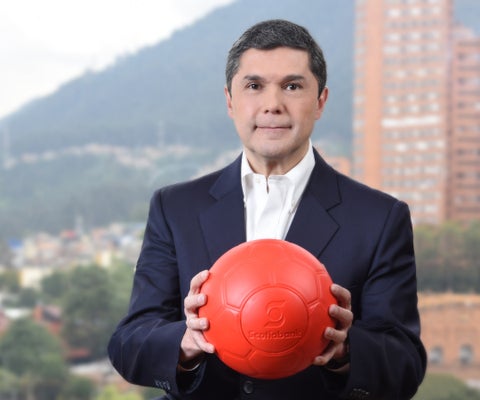 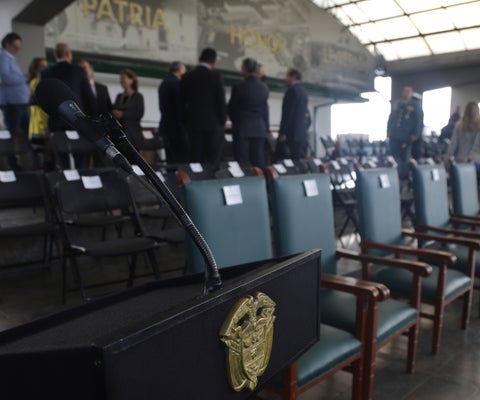 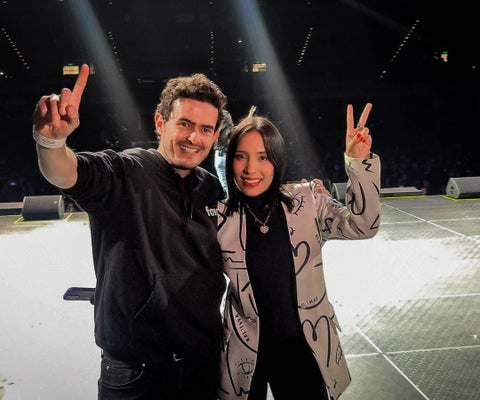 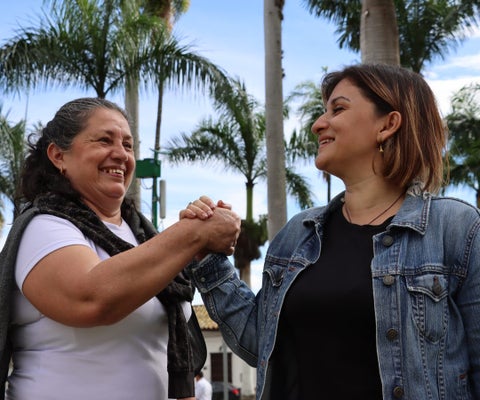 A Skeptic’s Guide to Wine in Cans